Popular Struggle and Resistance in Greece 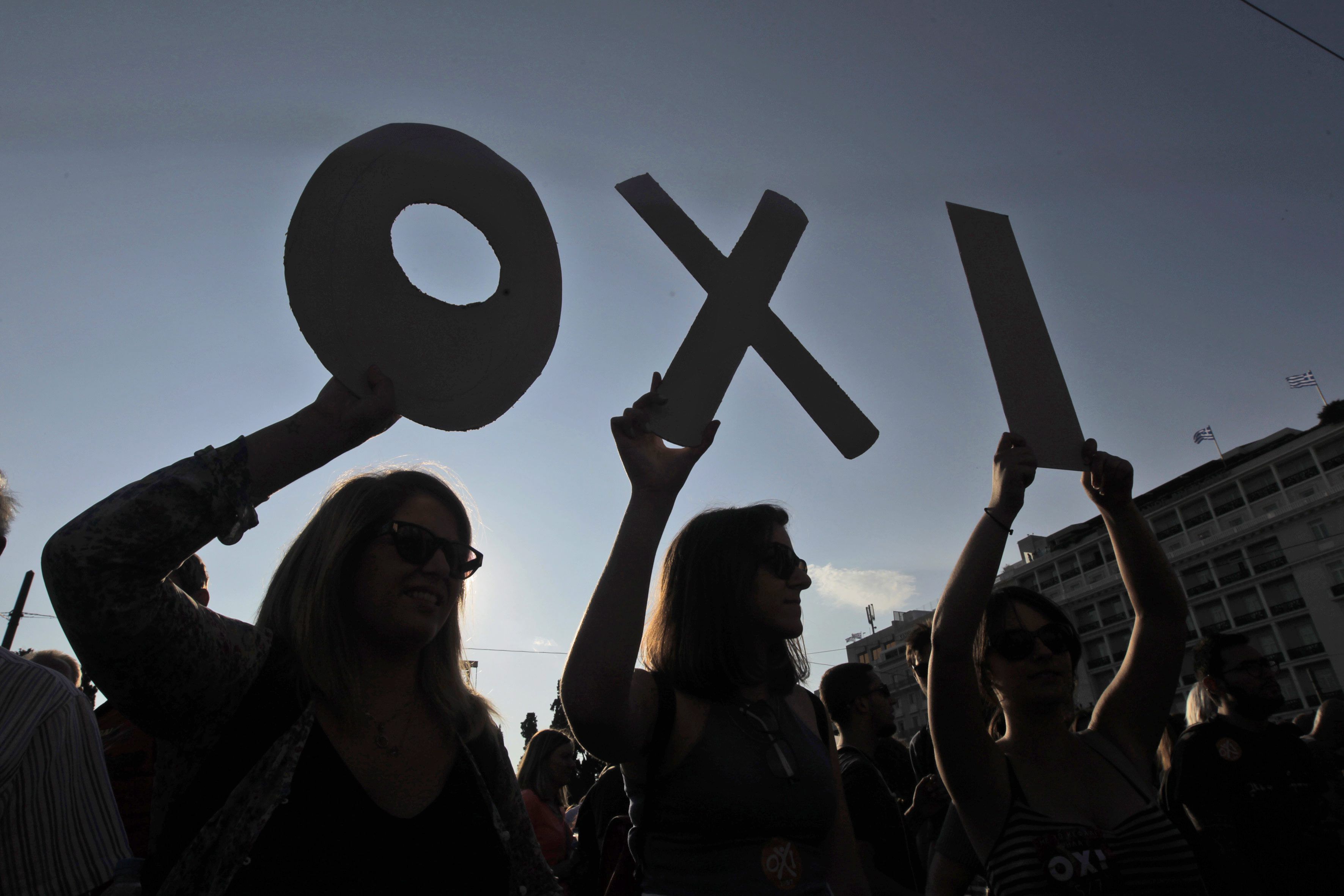 "No," the name and slogan of the movement against austerity in Greece

"The Greek people need allies around the world in their struggles for democracy."

The “Greek paradox” consists in the fact that a left government (SYRIZA) is forced by its foreign creditors to implement a barbarous package of austerity measures. What does it mean for today’s democracy?

The recent Greek experience reminds us that the rule of the market—which means, of course, the rule of those who dominate the market—is the guiding principle of neoliberal capitalism. Austerity, in other words, requires the ultimate hollowing out of democracy, which in its classical definition means rule of the people. No longer do the ruling institutions, such as the troika, even pretend that the people are sovereign. Without any shame or embarrassment, they are happy to pronounce that global financial institutions can override the democratic will of peoples. That is why any real campaign to restore democracy must centrally challenge the relations of neoliberal capitalism.

The defeat of the Greek government in the negotiations of last July was a decisive blow to people’s faith and hope that things are going to change and that a progressive alternative is possible. How can we reverse this paralyzing feeling?

The challenge is to recover the spirit and the sense of purpose of the Oxi campaign last July. This is not easy in the face of the massive capitulation by the Syriza government, a capitulation that undermined the Oxi moment. But within the struggles against austerity—whether it is demonstrations by pensioners, strikes by unions, or campaigns for migrant justice—a crucial challenge will be to rebuild the networks of solidarity and resistance that can rekindle hope in the face of despair.

The terms imposed on Greece by the international debt-holders have in essence transformed the country into some kind of neo-colony, with the members of a “task-force” to have an “enhanced and permanent” presence in Athens, in order to monitor all financial and social policy of the government. Are we faced with a neocolonialism in the heart of Europe?

This is definitely a kind of internal neocolonialism within the Eurozone. It signifies a declaration that elected governments will be dictated to by the representatives of global banks and finance. There is no longer even a pretense that the people of a nation are sovereign. But nationalist responses are not adequate to this reality. Instead, the task is to fight to reclaim democracy while also promoting international solidarity with all those seeking to democratize society and reclaim control for all those suffering from global austerity. The Greek people need allies around the world in their struggles for democracy.

Do you think that an exit from the eurozone would be a realistic and viable option for a Greek government?

Too often answers to this question are put in purely technical economic terms, with opponents and supporters of “grexit” debating its possible effects on investment, prices, employment and so on. But the question of the viability of exiting the Eurozone is fundamentally a political one. Of course there would be economic disruptions associated with leaving the euro. But Greece has already experienced years of economic trauma imposed by the rules of the Eurozone. So, it becomes a question of preparing politically to make a “grexit” part of a struggle to reclaim democracy. Can poor and working class people in Greece be mobilized for the struggles against the banks and multinational corporations who will try to sabotage an exit? Can they organize to support socialization of the banking system? Can people build the popular organizations in neighborhoods, workplaces, and schools that will assist the distribution of food and other supplies if distribution problems emerge? If so, notwithstanding inevitable difficulties, an exit from the Eurozone could be part of an inspiring movement to rebuild grassroots democracy and popular power in Greece. And that is massively better than years upon years of crushing austerity and social decay.

Liberal-capitalist democracy has shown its incompatibility with any kind of genuine democracy. You suggest the return to an assembly-style direct democracy. How easy is to achieve such a purpose under the present state of mind of the majority of the people?

Returning to assembly-style democracy presupposes the kind of struggles I have mentioned above. New forms of popular democracy will not emerge because someone suggests they are a good idea. They will emerge if people self-organize at the base of society to create new institutions of solidarity and resistance that are open and democratic. This happens when communities organize soup kitchens, when workers start directing the production of goods and services, when people in neighborhoods organize grassroots groups to support migrants and resist racism. Assemblies in the neighborhoods, in the workplaces, and in the schools are the basis for a radical, participatory democracy. Then such popular assemblies would need to elect delegates, who would be immediately accountable to their assemblies, to participate in larger-scale coordinating bodies—at municipal, regional and national levels. If the level of social-mobilization is rising, people can experience participatory democracy as an inspiring and transformative moment in their lives. And this can be the basis for dismantling many of the bureaucratic and authoritarian forms of governance in our lives.

Of course, none of this is easy. All the daily habits of life in a capitalist society encourage people to defer to “experts” and bureaucrats. That is why new forms of democracy will require new cultures of self-governance. It is in the course of changing the world and taking control of their lives that people come to imagine and experience new possibilities. In such ways they become empowered. And this is what it means to say that the struggle against austerity is principally a political question. It cannot succeed without new kinds of radical, popular and democratic political practices. And it is these which are the key to any real rupture with austerity, neoliberalism and capitalism.