The Left and the Election of Syriza 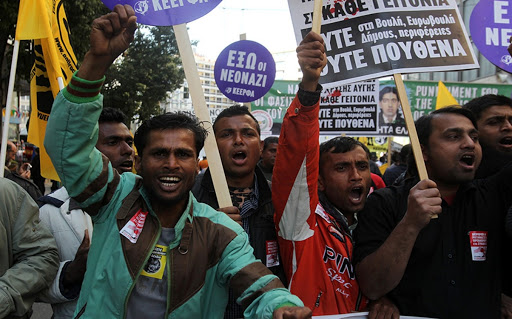 Anti-racism demonstration in Greece on March 22, 2014.

"... two dozen general strikes, anti-racist mobilizations against the fascist Golden Dawn, solidarity work in neighbourhoods to feed the hungry, protests by migrant workers ... only if there is a deepening of all these forms of struggle in the months ahead will we be able to say that the electoral victory opened a road to real social and political conquests for the left."

It was always going to be messy—and it has gotten so remarkably quickly. The decision by the Syriza leadership to form a coalition government with the anti-immigrant ANEL party has rightly shaken progressives who hoped that the Greek elections would rapidly transform politics to the left. Instead, we have been harshly reminded that the logic of electoral politics can be dangerously compromising for the left.

For anyone who thought the election itself would transform the landscape, this can only be a bitter disappointment. But Sunday’s stunning electoral defeat for Greek’s governing parties of austerity was not the product of the great minds of the Syriza leadership. It came about primarily due to six years of grassroots struggle—two dozen general strikes, anti-racist mobilizations against the fascist Golden Dawn, solidarity work in neighbourhoods to feed the hungry, protests by migrant workers, student rebellions, campaigns by healthcare workers, and much more. These struggles built the culture of solidarity and resistance upon which Syriza has drawn. And only if there is a deepening of all these forms of struggle in the months ahead will we be able to say that the electoral victory opened a road to real social and political conquests for the left.

There is little doubt that the Syriza leadership desperately wants to compromise with the dominant institutions, particularly the EU. This was to be expected. Moreover, the institutional power of capital is enormous. But, Syriza’s leaders are also under pressure from their party’s largely working-class base, which wants an end to austerity and a real campaign against poverty and social inequality.

In these circumstances, the Syriza leadership can be expected to tack and turn, cozying up to the forces of capital on the one hand, making concessions to the demands and expectations of its working class electorate on the other. So, it does a deal with ANEL at the same time that Syriza’s new Prime Minister, Alexis Tsipras, announces that his government will end its military cooperation with Israel and cancel its membership in the EU Free Trade Agreement if the blockade of Gaza is not lifted.

These contradictions will not be wished away. They will not vanish because leftist critics declare that they should. They will be resolved—one way or the other—through sustained social struggle. It will not be easy—and we were hopelessly naïve if we expected it to be so.

But Syriza’s victory and the defeat of the parties of austerity has galvanized the forces of resistance, filled them with energy and hope, and created a more favourable terrain for social struggles. And it is there, in struggles from below, not the arena of parliament, that the decisive battles will be fought.

In this context the March 21 international day of action against racism and fascism and for migrant and Muslim rights—a campaign which originated in Greece—now becomes an urgent rallying point for “Street Syriza, ” as it has been called, to set the tone and the direction of events.