The Monsters of Capitalism 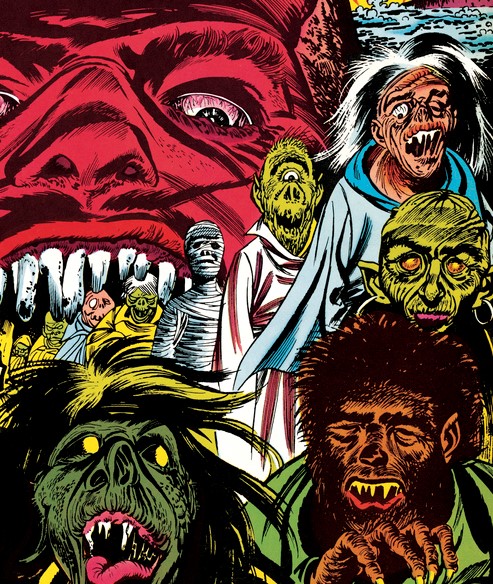 "The Haitian zombie thus retained the capacity for historical awakening that Marx identified with the proletariat. As much as workers might feel like the living dead under the domination of employers, they nonetheless hold capacities for resistance."

We live in a time of monsters, plagues, and terrifying disorder. Of course, capitalism has always been a monstrous system, as Karl Marx himself well knew. In his scientific effort to depict the inner workings of capitalism, Marx repeatedly turned to images of vampires and werewolves to portray how the system functions.

Revealing the crucial role of the unpaid labour of workers in fueling the monstrous growth of capital, Marx wrote, ‘Capital is dead labour, which vampire-like, lives only by sucking living labour, and lives the more, the more labour it sucks.’ Just as the vampire’s thirst for blood is insatiable, so is capital’s craving for ever more unpaid work.

To ensure that readers of Capital did not miss the point, Marx quickly mobilised another monstrous image. Condemning the exploitation and dehumanisation at the heart of the system, he declared that the secret of the modern economy is capital’s ‘werewolf hunger for surplus labour.’

Yet if any monster dominates images of late capitalism, it is the zombie. Across television screens and the pages of novels and comic books, zombies run rampant. So prolific have they become that, as the world economy descended into the slump of 2008-09, Time magazine proclaimed the zombie ‘the official monster of the recession.’ Today, we might add that the zombie is also the official monster of the pandemic.

Consider that the Centers for Disease Control in the United States has launched a ‘Zombie Preparedness Blog‘ to ready the population for the next outbreak of plague. Meanwhile, the Federal Reserve Bank in the US has published a major report on ‘zombie firms’, living dead companies that generate no profits. Not to be outdone, the World Economic Forum (WEF) has a piece on its website entitled, ‘Is your colleague a zombie worker?‘

Unwittingly, the WEF has gestured toward a monstrous image that hints of subversion. True, the idea of the zombie worker seems at first glance to be exactly what capitalism desires: mindless beasts of burden, unthinkingly following instructions. And that is the image that often dominates Hollywood and mass culture today. Zombies are often portrayed as mindless workers and consumers, obeying the commands of the system and stuffing themselves full of useless commodities as they go about their meaningless lives.

The figure of the zombie worker has deep roots in the historical experience of enslaved labour in Haiti, once the world’s largest slave colony. But it was during the period of occupation by the United States (1915-34), when US marines constructed a violent regime of forced labour to build roads and other infrastructure, that the zombie worker assumed its essential form.

Zombies acquired their unique meaning in Haiti as the animated dead, mere flesh and bones bereft of memory and identity, condemned to endless toil. It was this image that first entered the American culture industries in the 1930s and 1940s, and it carried a critical charge insofar as it suggested that capitalism zombifies workers, reducing them to mere labouring bodies mindlessly generating surplus labour.

According to one scholarly study done in the 1950s, the Haitian zombie ‘is a beast of burden exploited mercilessly by his master who forces him to toil in the fields, crushes him with work, and whips him at the slightest pretext.’ The zombie thus symbolised ruthless capitalist exploitation—and, as we shall see, it also hinted at the prospect of rebellion.

By the 1960s, Hollywood had transformed the zombie into a mindless consumer addicted to human flesh. While the image of the zombie consumer had a satirical bent in portraying a late capitalism choking on its own excesses, it lost the subversive undertone of the Haitian imagery.

Indeed, by the 2000s, zombies had become associated with apocalypse. With the breakdown of society, be it due to plague or environmental collapse, human survivors now had to fend off the living dead intent on devouring them. This was the premise, for instance, of the highly successful series The Walking Dead: so devoid of hope is the series that the leader of the small band of survivors at the centre of the drama celebrates when they enclose themselves in a prison—the West Georgia Correctional Facility, no less. Once ensconced in the prison the group’s leader pronounces their situation to be ‘perfect’.

Self-entrapment in a prison may exhaust the horizon of apocalyptic survivalism. But the Haitian image of the zombie also hinted at a radically different possibility: liberation. Lurking within the zombie labourer was the possibility of its awakening. Often a simple trigger was necessary—like salt on the tongue—and zombies could acquire self-consciousness and the capacity for resistance.

The Haitian zombie thus retained the capacity for historical awakening that Marx identified with the proletariat. As much as workers might feel like the living dead under the domination of employers, they nonetheless hold capacities for resistance. Notwithstanding their oppression and degradation, workers always retain elements of consciousness and creativity that nurture opposition to the dehumanising tendencies of capital. And because they produce the wealth that sustains the system, their revolts have the capacity to turn the world upside down. And so it was with the Haitian zombie, whose image always hinted at the great upheavals of the Haitian Revolution (1791-1804).

It is particularly fascinating in this regard that the first vampire tale published in the United States grounded its subversive message precisely in the legacy of Haiti’s slave revolution. The Black Vampyre, as it was called, appeared in 1819, just 15 years after Haiti declared its independence of all colonial powers. As researcher Sam George has pointed out, The Black Vampyre may also have been the first US short story to promote emancipation of the enslaved. The zombie at the centre of the narrative is a black man who has not only escaped the murderous designs of his master, but has in fact turned the tables on him, resulting in his master’s death.

This sort of dialectical reversal—the slave destroying the master—which is at the heart of revolutionary thought from Karl Marx to Frantz Fanon, is central to The Black Vampyre. Indeed, at a crucial juncture in the story, when a group of vampires meets with a crowd of slaves, one of the vampires addresses the gathering. He does so in the language of revolution: ‘Our fetters discarded, and our chains dissolved, we shall stand liberated, –redeemed, — emancipated, — and disenthralled by the irresistible genius of UNIVERSAL EMANCIPATION.’

From the time of the first vampire story published in the US, then, this monster story was charged with the emancipatory ideals of the Haitian Revolution, embodied in the Black vampire and the masses of the enslaved. The same critical charge animated the original appearance of the zombie labourer in Haiti.

As late capitalism stumbles from one horrifying crisis to another—be it environmental, economic, or epidemiological—we need to remember this duality of the monstrous. Yes, Marx needed monstrous images to depict the workings of capitalism. But he also would have understood the significance of rebel monsters—zombie labourers and Black vampires—capable of turning the world upside down.