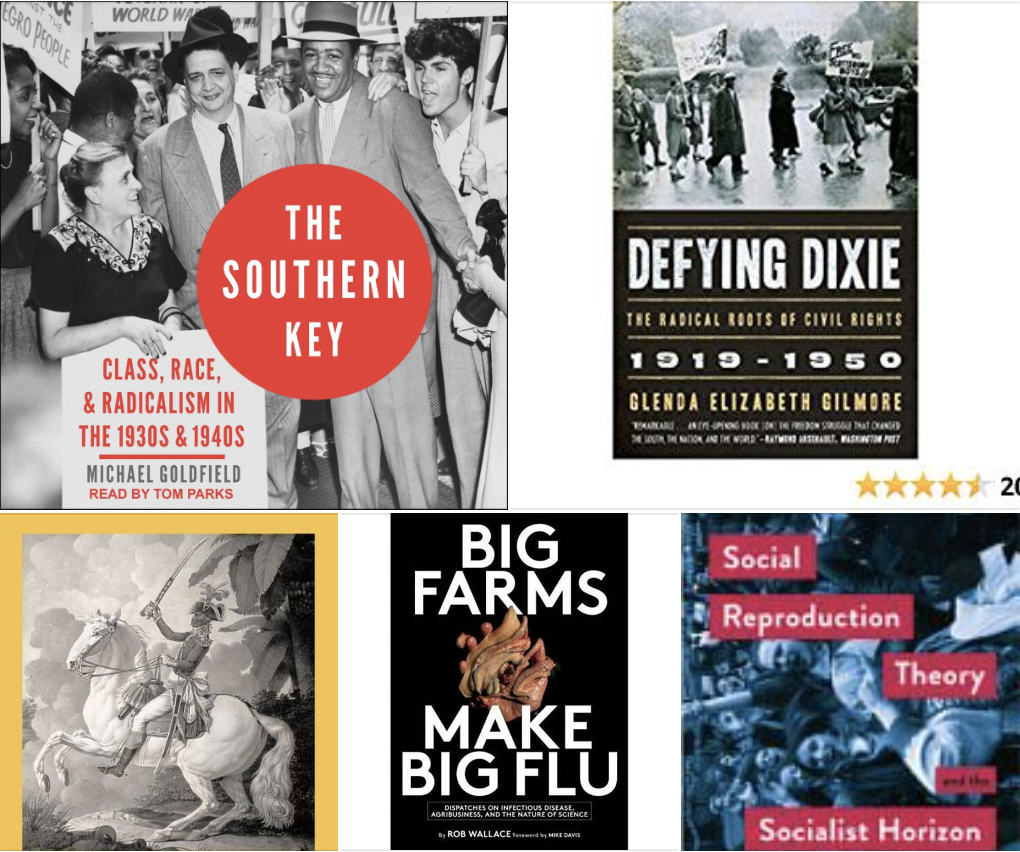 This year’s list is dominated by works dealing with the historical dialectics of capitalism, slavery, race, and resistance. It also includes texts addressing social reproduction, care, and life and meaning. The list is organized thematically, not in rank order.

“There is no such thing as the South—it’s America,” said Malcolm X. Michael Goldfield agrees. In a compelling piece of historical research, Goldfield argues that the South shapes the pattern of political life in the United States and that this pattern can be broken only by multiracial working class organizing throughout the region. A pipedream? Goldfield shows that it is not, drawing upon extensive evidence of multiracial upsurges of Southern worker activism in mining, steel manufacturing, woodworking, and textiles across the first half of the 20th century, usually led by the left. These upsurges were ultimately squandered—and outrightly squelched—by bureaucratic business unionism and its concessions to Jim Crow racism. It is hard to overstate the importance of this book, particularly for those of us on the left in the US. “The Southern Key” is a diagnosis of so much of what ails U.S. society—and a call for socialists to rejoin their best traditions of anti-racist working class activism. At a time when sections of the left see anti-racism as a mere “identity” issue, Goldfield shows that it is indispensable to authentic working class radicalism.

2. Mark A. Lause, “Long Road to Harper’s Ferry: The Rise of the First American Left”

“Long Road to Harper’s Ferry” situates some of these political questions in a 19th century context. Historian Mark A. Lause argues that John Brown’s raid at Harper’s Ferry was not a random event. Instead, it was the product of the growing convergence of abolitionism and working class radicalism in the U.S. “Long Road to Harper’s Ferry” charts the struggles of the socialist left in the United States to free itself of racism and of reliance on bourgeois political parties. Not surprisingly, Lause demonstrates that *both* of these—abolitionism and political independence—were indispensable to the creation of a genuinely radical left. And that left, as he shows, consistently claimed Brown and the raid that struck terror in the hearts of planter capitalists and their Northern allies as part of its legacy.

I finally got to this 2008 book last year. I shouldn’t have waited so long. This text too takes up concerns about socialists and anti-racist organizing. Gilmore powerfully demonstrates that the U.S. Left, particularly the Communist Party (CP), did much of the heavy lifting that laid the basis for the civil rights struggles of the 1950s and ‘60s. An inspiring cast of characters takes the stage here, many of them unsung radicals who bravely challenged Jim Crow and built mass struggles in the South. There are lapses (Gilmore does not always grasp the ins and outs of power struggles in Moscow and how these damaged CPs in the U.S. and elsewhere). But this is such an important contribution to histories of the anti-racist left that such lapses are easily forgiven.

4. Peter Linebaugh, “Red Round Hot Globe Burning: A Tale at the Crossroads of Commons and Closure, of Love and Terror, of Race and Class, and of Kate and Ned Despard”

I’m not sure any other historian could pull off a tale like this. Peter Linebaugh takes the improbable love affair of Edward (Ned) Despard—an Irish soldier turned anti-colonial revolutionary—and his wife Catherine (Kate), the abolitionist and prison reformer descended of enslaved Africans. Using their romance as a lens, Linebaugh sweeps us across Jamaica, the United States, Nicaragua, Ireland, and England as revolutionaries mobilize against colonialism, slavery, poverty, and industrial capitalism. Ned would die on the English gallows in 1803 for his insurrectionary activity, while Kate continued to organize for their cause. “Experienced on two or three continents,” Linebaugh writes, “she was a revolutionary of the time.”

5. Stella Dadzie, “A Kick in the Belly: Women, Slavery and Resistance”

Sticking with the theme of revolutionary Black women, Stella Dadzie has written a powerful summary of women’s resistance to New World slavery. Drawing on forty years as an organizer, teacher, activist, and writer, Dadzie demonstrates the courage, creativity, and endurance of enslaved women over several centuries as they organized, plotted, and resisted bondage. This is a slim volume (176 pages of text) that punches way above its weight.

In the background of the struggles documented by Dadzie and Linebaugh looms the great Haitian Revolution (1791-1804). After decades in which historians, rightly, turned to the revolution from below in Haiti, Sudhir Hazareesingh has returned to the biography of its most important leader, Touissant Louverture. Hazareesingh undertook extensive archival research (visiting scores of archives across Europe and the Caribbean) and corrected a number of misunderstandings about the life of the great revolutionary leader. The book is also a highly readable account that situates Toussaint in a tradition of radical (and anti-colonial) republicanism. It lacks, however, the profound grasp of the dynamics of social revolution that distinguishes James's "The Black Jacobins"— which remains the essential starting point for all readers. But for every student of the Haitian Revolution “Black Spartacus” is absolutely indispensable reading.

But was New World slavery capitalist? Recent years have seen an outpouring of studies of the slave South in the U.S. that reconsider its relationship to global capitalism. “Accounting for Slavery” is among the most important of these, as Rosenthal scours planter account books and diaries to demonstrate the detailed record-keeping and accounting that guided planters as they disciplined labor and managed their investments. Next to the whip, she suggests, sat the account book—both instruments in a capitalist mechanism of racialized labor discipline.

How could I not recommend arguably the most important book for understanding capitalism and the pandemic? “Big Farms Make Big Flu” brings together years of reflections by Rob Wallace on the way deforestation and agribusiness are producing new and more viral infectious diseases. This is a highly readable collection, and the repetition is often helpful to making connections. If there is one work on the pandemic that every radical should read, this is it.

We are experiencing an exciting moment in social reproduction theory, as its theoretical delineation gets increasingly sophisticated and its empirical applications deepen. Last year brought us Sue Ferguson’s “Women and Work: Feminism, Labour, and Social Reproduction” (towards whose author I have a known affinity). This year, Aaron Jaffe delivers a theoretically astute and sophisticated intervention taking up the themes of labor-power, gender and the body, intersectionality, and the socialist horizon of emancipation. A real gem.

If social reproduction theory foregrounds care work, “This Life” excavates the normative foundations of any commitment to caring for life. Whatever our explicit religious or spiritual commitments, urges Hagglund, all socialists are animated by an ethical commitment to life. This constitutes an abiding *secular faith.* Indeed, all of our commitments as socialists, he argues, pivot on “the faith that life is worth living, which is intrinsic to all forms of care.”  Without that, our political investments are unintelligible. Not every reader will find all the lines of argument here equally compelling. I for one would have preferred more Hegel and less Kierkegaard. But this is a learned and insightful contribution to renewing socialism for our times—one that recognizes this cannot be adequately done outside philosophy and ethics.

Speaking of which, I will have more commentary on philosophy in the months ahead. Sitting on my desk are Daniel Andrés Lopez, “Lukacs: Praxis and the Absolute” and Cat Moir, “Ernst Bloch’s Speculative Materialism: Ontology, Epistemology, Politics.” Each raises questions vital to the future of revolutionary socialism. Stay tuned.